4:02 PM EST Jericho lovers! Looks like tonight is the season finale. Whether or not Jericho will be picked up by another network / station remains to be seen. Regardless, please enjoy tonight's episode. You deserve it!!!


3:10 PM EST Guys and gals, I certainly wish I had better news to offer you this holiday weekend, but unfortunately it looks like CBS is pulling the plug on Jericho. Tuesday will be the finale. "The ending that will air Tuesday night doesn't entirely slam the door on the series, but is different than the cliffhanger version, sources said. It also doesn't preclude the possibility of "Jericho" finding a second life on cable, though the economics of the production will likely prevent a continuation of the show."

Try and have a great weekend though!!! You still can look forward to Tuesday! (Glass is half full, right?)


1:42 PM EST I hate to admit it, but I had to watch Jericho last night instead of Tuesday night because it's hard for me to stay up late after running and biking. So, the verdict?!?! Wow. I enjoyed the first couple of episodes, but these last 2 have totally kicked some major butt! I can't wait for next week.


9:45 AM EST Wow! Don't want to spoil it for anyone, but last night's episode, was...wow! Did you guys see this message from the cast and crew?


4:52 PM EST Happy leap day Jericho fans! Today we are shipping our Nuts for Jericho T-Shirts along with peanuts to London!!! The company in charge of UK distribution of the Season 1 Jericho DVD wanted as many shirts and peanuts to go with them to go along with the DVD promotion! :-) Awesome, eh?

Have a wonderful weekend!!! 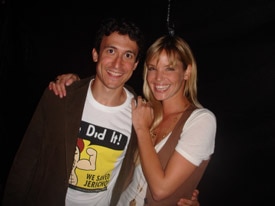 8:40 AM EST Good morning Jericho lovers! I'm a little tired, but staying up was well worth the price! It was a bit surreal seeing Jericho back on the air, and I couldn't help but giggle. (Were these the same people I was hugging back in July in LA?!?! (Guys, don't get too jealous with this photo of Ashley Scott and me!) Haha!!!)

It feels good to have Jericho back.

And Bill eating peanuts in Jimmy's hospital room was priceless!!!


7:40 AM EST Tonight is YOUR night! You actually did it! You saved Jericho! Sit back, relax, and enjoy! Thanks for inviting us to the show!


6:50 AM EST One more day guys and gals!!! I woke up this morning to a few emails from friends saying they saw a Jericho commercial last night mentioning our campaign with a shot of our peanuts and our Save Jericho t-shirt!!! Haha!


1:10 PM EST 4 days until Jericho!!! But if you only count business days, that makes it 2. Hehe. Sorry, I am lame. I know. :-) Just heard from the creator of Jericho about a "kickass review in variety today.." Check out the Jericho Review in Variety Magazine (be patient- the page loads slowly). Have a delicious weekend!


8:03 AM EST Good morning Jericho lovers!!! Don't these Jericho commercials get you all fired up? Get this...I was over my parents' house the other night when I suddenly heard a shriek from my mom, "Jeffrey, Jeffrey! Come here! Come here! Look what's on TV!" Hehe...my mom got all giddy with excitement after seeing her first Jericho commercial. Ah, feels so good!!!


10:15 AM EST Check out the weekly high scores of our wicked Jericho Peanut Assault Game. Have a nuttily wonderful weekend!


7:20 AM EST Hello Jericho lovers! Happy New Year! Yeah, I know, I haven't had much to say lately, but I wanted to wait for something meaningful. When I met the writers, producers, and actors back in July, I was assured that the new episodes were going to be fantastic and even a notch above Season 1 episodes. Of course they're biased, but they were pretty emphatic and I wanted to believe. Well, finally, a third party confirmation...I just spoke with a TV drama journalist and here's a snippet of what she had to say, "I've now seen the first 3 episodes of the second season and all I can say is WOW!!!! My first thought was how pleased all the fans will be with these episodes. You all did not put forth those efforts in vain. They are above and beyond anything I could have hoped for - I think they may even be better than any season one episode! Oh - and the nuts got a cameo in the first episode! You guys will love it!"